Mykoplant® 100 builds symbiosis with all known sorts of grass. It improves its growth, its root system, the intake of nutrients and makes grass more resistant against diseases. Another positive side effect was observed – due to the thicker rooting of the lawn the growth of weeds decreases.

In the building of sports grounds one differentiates between natural lawn, rolled turf, and hybrid lawn. The natural lawn is seeded directly on the spot where it will be used. Whereas the rolled turf is produced at one place, is cut out after the production and transported to the place where it will be used and laid out there like a carpet. The turf is rolled for transportation. That is the explanation for the name “rolled” turf. Hybrid lawn is a mixture of an artificial turf and natural lawn. Man-made fibres are worked into the natural lawn, which makes it more durable.

The rolled turf is mainly extensively produced for building of sports grounds and facilities or for use on areas which should be planted over in short time. High performance sorts of grass are used and cultivated here. The cultivation period takes as a rule 6 Months. During this period of time the lawn reaches its best possible root growth.

Application in Production of Rolled Turf

In the production of the rolled turf Mykoplant® 100-products are used over the final grade while seeding. Due to the big difference in density between seeds and the Mykoplant® 100-products, both components should not be mixed together before spreading them out. It is always of advantage to spread them separately. No further steps are needed. You can treat the surface as usual. Please contact us for a detailed consultation.

On the first sight, during this production stage the mycorrhisation seems to be of secondary importance. The best possible conditions seem already to exist. However, the opposite is true: the root symbiosis taking shape on this stage is of essential importance for the following stage of development. The real stress begins for the turf not until it is cut off and ready to be laid. Now the rolled turf has to be transported and has to strike roots as soon as possible. Now mycorrhizae have a chance to fully reveal themselves. The grass roots associated with mycorrhizae overcome this new stress more easily. It means that one can very soon walk or play on the area. And, compared to the cultivation stage, grass seems to easily manage poorer soil conditions. The following application rate is recommended:  100 ml/m²

Mykoplant® 100-products can be easily used during the lawn aeration. In this case, it makes sense to use a conventional spreader together with an aerator. After the aeration granules of Mykoplant® 100 are spread over the surface with spreader, and afterwards broomed into the holes and rolled over. The recommended application rate is from 150 to 200 ml/m².

For the golf cources we recommend to use Mykoplant® 100 Cereal. This product has a form of powder soluble in water and is spread over with a sprayer. Please contact us for a detailed consultation.

TestThe use of mycorrhizae preparations results in higher growth of stronger roots of the rolled turf. In order to show it, the samples of rolled turf laid at the Reichstag in Berlin have been cultivated for 4 weeks in the cases with a drainage layer of bricks chippings and raw expanded clay. In the end the roots development was assessed. 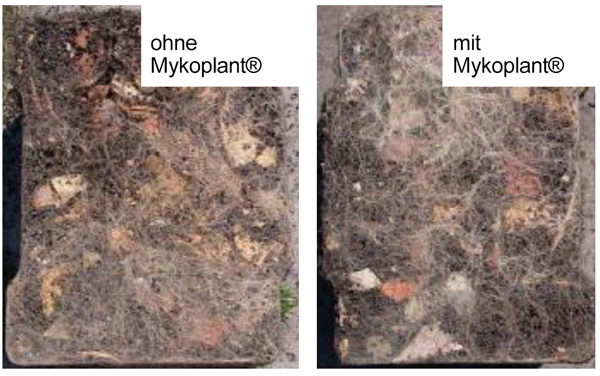 The pieces of rolled turf treated with Mykoplant® 100BT built a distinctly thicker fine root system compared to those which were not treated. The improvement of the root system of grass in rolled turf is the main effect and advantage of this treatment. As a result, turf regenerates quicker and grows more durable against the mechanical stress and outer impacts.

Further interesting aspects, speaking in favour of use of the Mykoplant® 100-products as a preventive measure, are the higher drought resistance and better nutrients intake of the rolled turf.

The investigations of sports grounds and golf courses in terms of lawn diseases show that plant harmful nematodes, such as meloidogyne naasi for example, make up a growing problem. The use of mycorrhizae in this case offers prevention and protection against these pests.

The mycorrhizal association is a “positive” infection of the plants’ roots. So, nematodes or any other pathogenic fungi are treated by mycorrhizae as competitor. The mycorrhiza fungi build the mechanisms of protection and protect the plant roots from the damaging attacks. Mycorrhizae stimulate the plant’s own immune system, so that it can early enough block the fungal or animal parasites even on the foliage. This mechanism was tested and confirmed on such cultivated plants as banana and tomatoes.

As a reference we can show the successful use by the different clubs in the German football league.

We are happy to give you more information about our long-standing experience in use of mycorrhizae on the sports grounds.